My Attempt at Becoming "Baby-Wise" 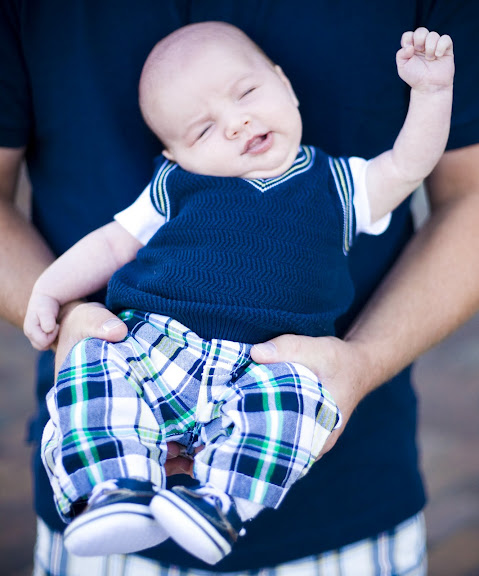 Two weeks ago I decided...enough is enough. Logan was approaching 5 months old, and was still waking me up at least 3 times a night, and demanding a 3-4am feeding! I was tired, I was dragging and I needed something to help me get this boy to sleep longer!

I remembered that I had done a "babywise" method with my first kid. I wasn't too strict with it because both my girls were great sleepers and eaters. They just kinda created their own schedule. Logan has been totally different. I have had some serious "tweaking" to do. According to the book "Babywise", creating a daily schedule of Wake & Feed, Wake-time, Nap; your baby will regulate their nights and sleep longer. I have done research, and everything I've read says a Five month old baby should be sleeping around 10 hours in the night and about 15 hours total. I won't go into too many details, but Logan was just doing whatever, whenever. I was just following "his lead". So I started a schedule.

I pretty much stay in the house all day, every day. If I make a trip to the grocery store, it is a quick trip during his longest wake time. So far (up until daylight savings yesterday), Logan has been sleeping from 8ish to 7:30 without a bottle. He will wake me up just one time for his pacifier. Hallelujah! Now this is where I need some advice from any BABYWISE mom.

Logan likes to "cat nap", so I'm trying to break that cycle by making him go back to sleep when he wakes up during his naps. Thsi morning I could not keep him awake from 7:30 to 9:30. He was so fussy after one hour of being awake, I just put him to bed. So much for my "strict schedule". I just don't know why he is so grumpy during the day...I know he wants some "cat naps", I just don't want him to sleep his day away and then not give me sleep in the middle of the night. What do I do??