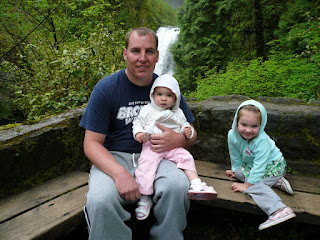 What a fun trip. I'm actually bummed to be back already. It was short, but a blast. We left Sunday morning and drove to Salem where we stayed in a Hotel. The girls did really good on the drive but they were ready to get out an walk around. We took them to the pool, which was too cold, so we all hung out in the hot tub for a bit. The first night with Mycah was Horrible!! She refused to sleep, so Alex and I were up between 1am and 5am just trying to get her to sleep. The next morning we had our continental breakfast and drove twenty minutes to Silver Falls State Park where I had planned and fun hike for us. The trail was to rough for any kind of a stroller so we geared up to pack the girls. 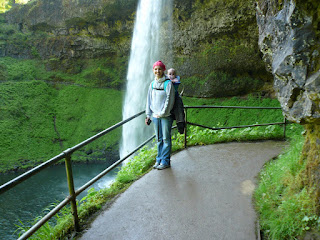 The Ten Falls Trail is about a seven mile hike. We started off and were doing ok. Alex was carying Dejah and I was carying Mycah. This my friends was much more difficult than I had expected. First off, I NEVER work out. So I was really tired early on. Despite the fatigue, the hike was beautiful. 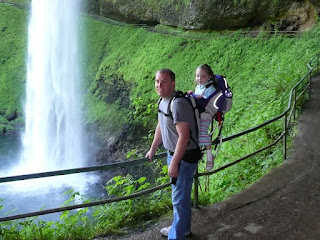 The pictures don't capture the real beauty of it all. We had Dejah walk for a while and that gave Alex a bit of a break. Toward the end of the hike we took a short cut which cut out the last two miles of the hike. Making our hike a five mile hike. 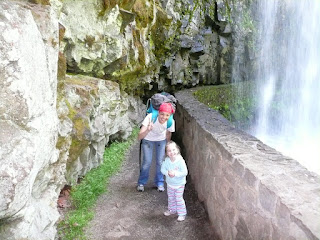 The girls were tired and Mycah was falling asleep on my back. We drove a little more than an hour over the the coast where we stayed in Depot Bay in my sister's Time Share for two nights. It was BEAUTIFUL! There were two bedrooms, a living room, full kitchen, cable, indoor/outdoor pools and spas, game room, and our very own view of the Ocean. The weather was of course cloudy and rainy but pleasant. The first evening there we hit the casino for an all-you-can-eat buffet. TERRIBLE food. That night Mycah slept like an angel. The next day we visited the beach and then took the girls the the Under Water Aquarium in Newport. They loved it! 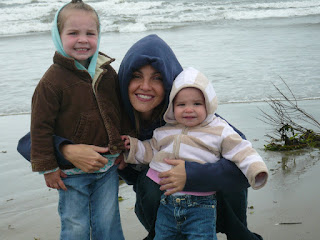 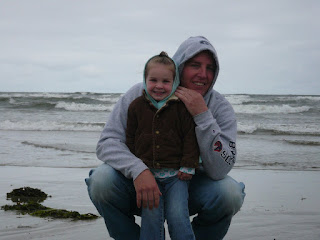 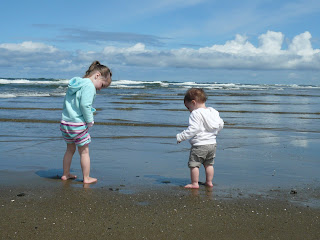 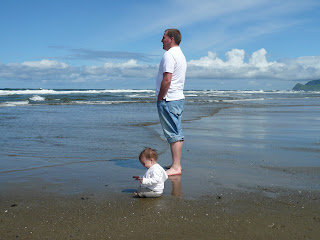 Our last morning there the sun came out and the beach was a blast! After checking out Wednesday we took them to the Portland Zoo and then stayed one more night in a Hotel. We all had a great time. There were so many details, but I will have to make my own entry for that, it would be too much for all of you to read.
Posted by Anna Beal at 8:21 PM