A SCARY Situation That Could Have Been MUCH Worse!

If you are from Boise, you should be somewhat familiar with this place. It is the Edwards Cinema 22 with Imax. Also the place that changed my idea about Boise last night. I will explain the numbers in a minute.

So this week, Alex will be going to the Humanitarian Football game with his brother. Since he is going to be going out, I figured I deserved some time out as well. I called up Joy. I kind of know her from church, and thought she might like to get out as well. I'm not a very good planner but suggested dinner and maybe a movie. We ate at Applebees then left around 7ish. We were talking about movies, and I mentioned Avatar. I originally said I would never see that movie. Then I saw the "making" of it and thought it might be better than I was giving it credit for. She said that she had seen it and LOVED it and would totally see it again. So we drove out to Edwards to see if we could get in the IMAX 3D. We got there too late, but there was a 3D showing at 7:20 in the main theater (the current time) that had 30 seats left. We bought our tickets and ran in. It was completely full! We decided to trade our tickets in for the next 3D showing 8:20. Since this is a 3 hour movie we knew we were going to get out late. I called Alex and let him know I wouldn't be home till around midnight. Ok, onto the point of this post. The movie was awesome! I had a great evening. We walked out of the theater (point one around 11:30). All the businesses were closed. Lights out and all. We were parked fairly close. (RED X) It was pretty cold out, so we were walking pretty fast. At around point 2 I noticed a car down the way (blue X point 3), with its headlights on, not in a parking spot, kinda parked parallel to the curb. As we continued toward my car, that car started slowly driving in our direction. At around point 4 I could see it was two young Latino guys in a big silver SUV coming right up to us. Instantly my throat sank into my stomach and I got a really sick feeling. My first thought was "They are up to NO good", "get out". Joy says "Do they want our parking spot?" (I think she realized right after she said it, that was not their goal since the parking lot was full of them). I said "Joy, get in the car, get in the car". Of course it was locked. Not a nice car with remote unlock. I had to stick the dumb key in and open the door to get her side unlocked. As I was unlocking the car. These guys pulled up almost right next to us (Blue X point number 4). I couldn't move fast enough. My hands were shaking and all I could think was..."get in, lock the door". We got in, locked it. And as I stared the car, they were getting out. The whole time looking right at us. They walked slowly over to the side walk and I pulled out ready to leave that parking lot ASAP. I was shaking and I said, "Joy, they are up to something". She picked up the phone and called dispatch. She told me to pull back around to get their plates number. I did, and as we came around they were back inside their SUV. I think they saw us on the phone. She reported the plate number and we rushed out of there. I got on the freeway, really hoping they wouldn't have followed us. I wasn't too worried about that then as we got over to take our exit, the police called back for more info and they passed right by us. There was really nothing the police would do at that point. We got off our exit and they kept going. I felt so sick all night. Joy had mentioned to me, if we had parked any farther down that situation could have been way worse. I am thanking the Lord for watching over us, and getting us home safe. We were both pretty shaken up. I honestly never would have thought I could be in that kind of Danger here in Boise. I guess we will both be thinking a little more about keeping our activities to daylight hours. 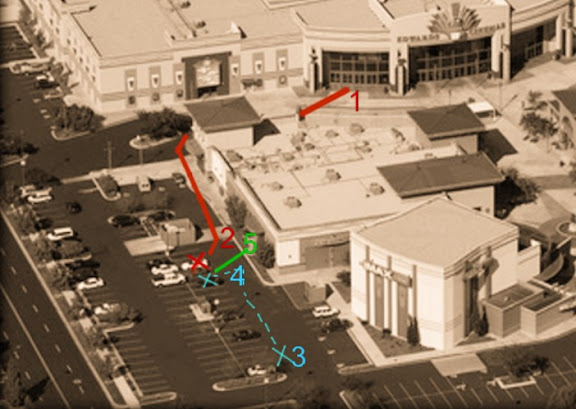