Many of you probably already know of Alex's "near-death-experience". But I'm sure there are plenty of you who do not know his story. So I thought I could take the time today, since it is the same day it all began....President's day.


I say several years ago, because I don't know exactly what year it was, and Alex isn't here to tell me the details. I do know he was a student at Boise State, attending the LDS Institute and Student Wards. This is before I ever knew him, but I do remember hearing the story when it happened.


On President's Day weekend...Saturday, a bunch of "students" were getting together to go "caving/spelunking" to Smith's Crack Cave near Mountain Home. He'd never been, but was an adventuress person and was excited to go. They went, they had a blast, and Alex was wanting some more. On Sunday, he announced in Church that he was getting a group together to go again the following day....President's Day. The day came, and only one guy showed up. Not quite the turn out expected, none the less, Alex was excited to go again.


They drove out to the Mountain Home exit and down the dirt road that lead to the opening of the cave, which is pretty much a "hole in the ground". They were dressed lightly, had one candy bar, and one small flashlight with extra batteries. They entered the cave and began the descent into the dark hole. If you've never been in this cave before its not too difficult figuring out where to go, because the way has been spray painted with arrows. It is narrow, dark, cold, and very dirty. It requires the ability to climb and keep a stable foot. Sometimes you might even want a hard hat. There are a few difficult areas to get through, the hardest is a long drop that required "shimmying" down with your back against one wall and feet against the other. Shortly after that is what is called "the birth canal". You basically have to get on your back and stick your head into a small opening and work your way to the other side.


Ok, so back to Alex. They got to the drop. The one guy held the flashlight while Alex made his way down. When Alex got to the bottom he needed the guy to somehow get the flashlight to him without breaking it. Alex told him to clip it onto his shoe and pass it down with his foot. As he did so the light slipped from his shoe and when crashing down to the ground....SHATTER! Darkness. So dark you can't see ANYTHING! Not a glimmer of light anywhere, your eyes will never adjust.


Somehow he got the other guy safely down the drop. Meanwhile Alex spent what seemed like hours feeling along the dirty ground for the pieces of the flashlight. Somehow he managed to get enough pieces together, added his spare batteries, and got a faint light from the flashlight. As he held the thing together, they made their way a little farther to the birth canal. They both squeezed through then came to some flat ground just before the assent up when the light gave up completely. So there they were. Stuck at the bottom of a Dark Cold Cave.


Surely, someone would come through behind them and find them there. At worse, wouldn't someone from home notice you were gone? Well, if you are a single student, living with roommates who are constantly coming and going, what are the changes anyone would notice your absence before it was too late? That day ended. No One came through the cave. No one at home noticed their absence. Tuesday comes, and Alex never arrived at work....which NEVER happens. Somehow they just figured Alex missed for some good reason, and didn't concern themselves with it.


In the mean time....they only person that noticed anything ODD was happening was a train operator. You see, there happens to be some tracks that run fairly close to the opening of the cave. Sometime on Monday (?) he noticed Alex's car, he must have made a mental note, because on Tuesday as he was headed the other direction, he noticed it was still there. Supposedly he got a sinking feeling that he needed to make a call. He did, then Search and Rescue found Alex and this other guy, stuck inside. They helped them make their way out and gave them water and called Alex's family. His brother and wife took off to Mountain Home to pick them up. They went about 35 hours with no water, no heat, and one candy bar. They were freezing and starving. If it hadn't been for the train operator heeding that feeling to make a phone call, My beloved Alex probably would have died. I am so grateful he is here. Since then, Alex has learned a valuable lesson about life and is grateful for his "second chance"


Several years later, my brother-in-law wanted to go to the cave, so we all made a trip of it.

Here are the train tracks. 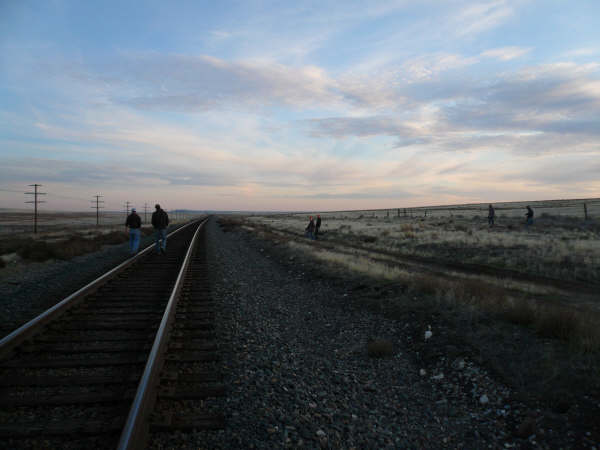 Here is the Exit hole, its a bit of a climb up to get to this point. My Brother's friend is sticking his head out. 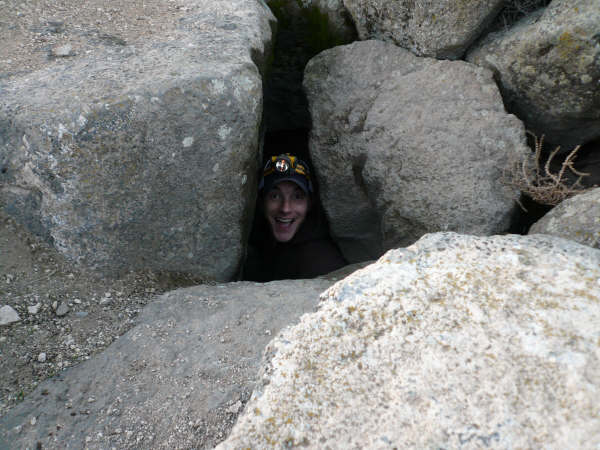 Inside the cave you can see it requires some climbing. 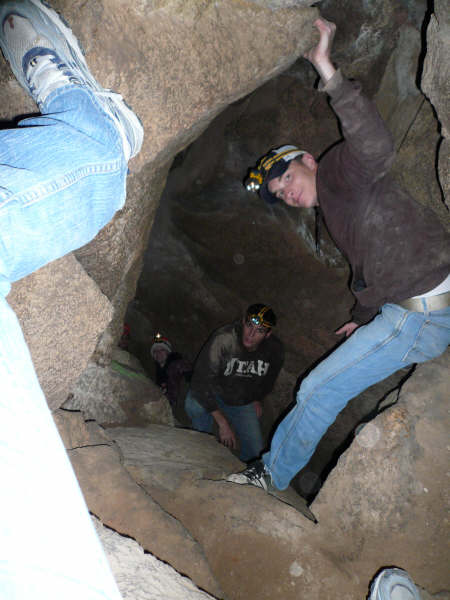 Me, going through the "birth canal". 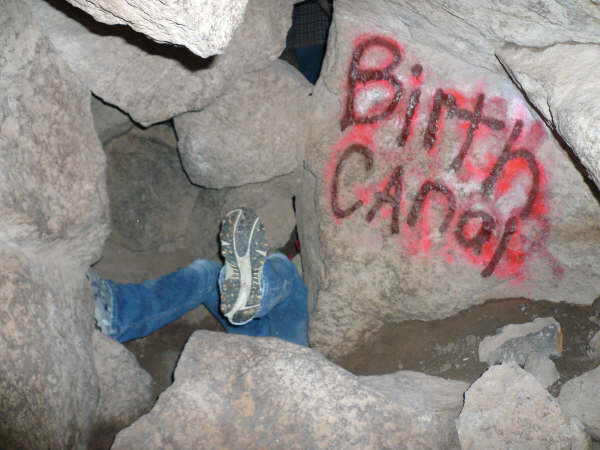 Here is the "drop" now equiped with rope to help. 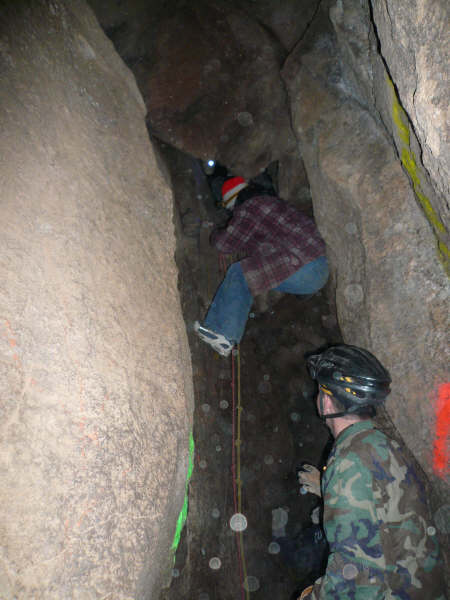 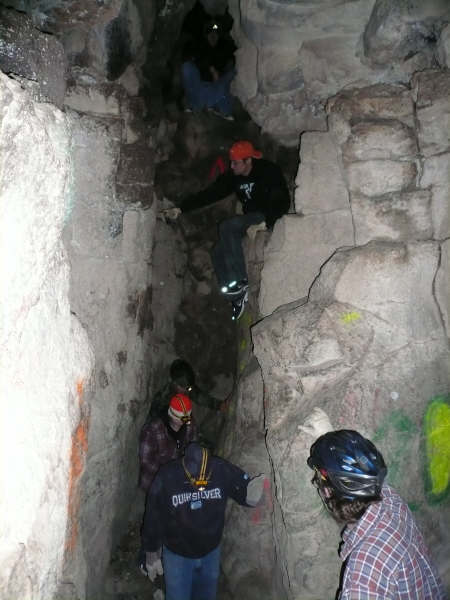 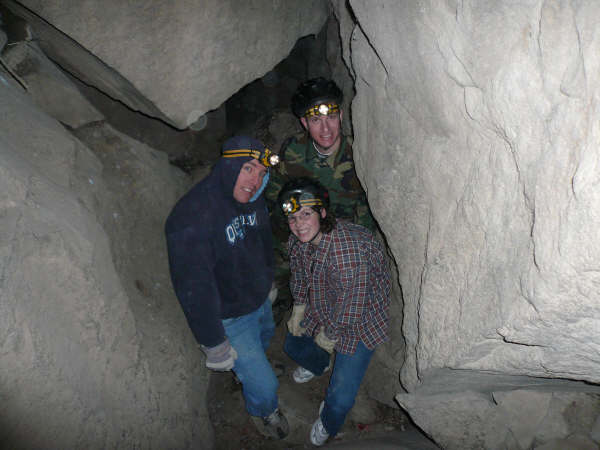 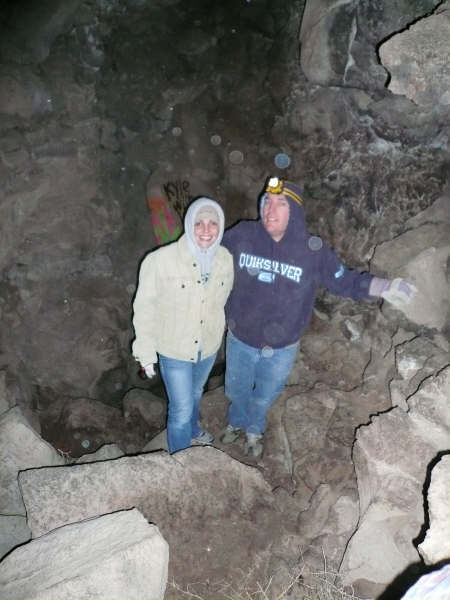