So last week I posted a question on my Facebook page: What night to take your kids trick-or-treating?? We've been watching the news and apparently there were a ton of people planning on doing it on Saturday evening (not Halloween) AND Sunday. So the response to that question on Facebook confirmed what was said on the news. People would be doing either one of the nights. We decided to just do it Saturday evening. It was NOT a religious thing, it was...lets get it over with...thing. Our ward (church group) decided to opt out of the "TRUNK-OR-TREAT" this year and do the youth auction, soup pot-luck, and Halloween party all in one night on Friday. We figured...church party on Friday, Trick-or-treating on Saturday, hand out candy Sunday. Here is how it turned out:

Friday evening, I burnt my soup upon reheating. We were fifteen minutes late to the Friday "THINGY" (that's pretty much what it was in my opinion). Because we were late there was NO place to sit in the cultural hall. We ended up in the fourier to eat. The "Halloween" portion for the kids was crazy and they had to stand in lines outside the classrooms to do a cake walk or a spook alley. Oh well. I was kind of in a bad mood because I spent my morning making a fabulous soup...and I burnt it! There was no form of trick-or-treating. Oh well, we'll make it up Saturday.
Saturday Alex carved pumpkins with the kids. We went on a little family outing to this trail that overlooks the snake river. It is about 20 minutes south of here. Anyway that was a pretty good time. Here are the pictures..... 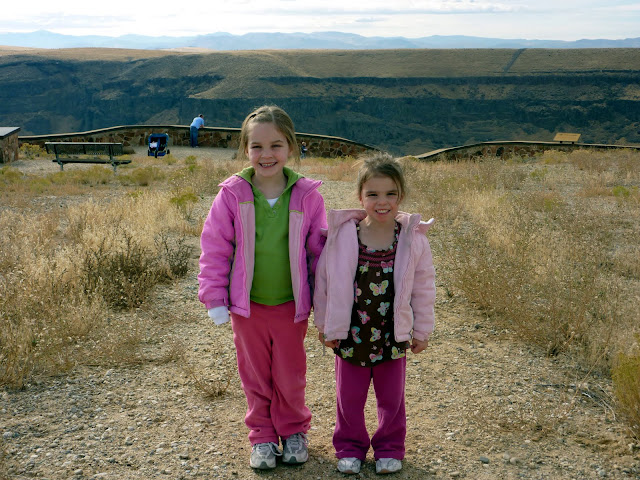 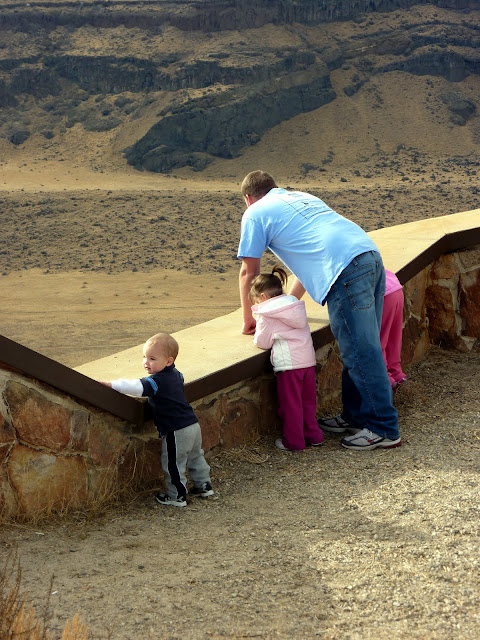 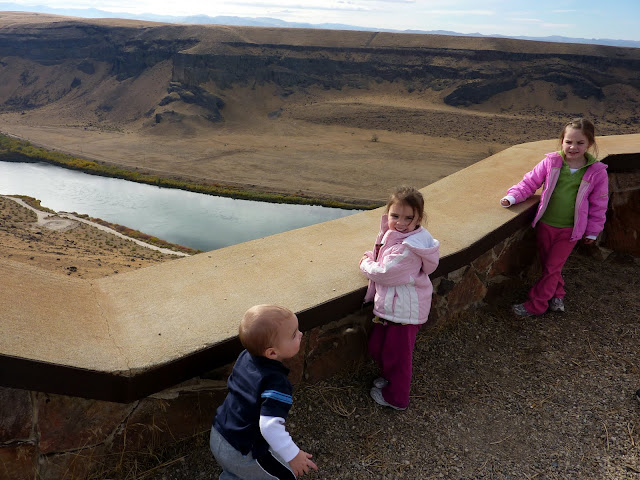 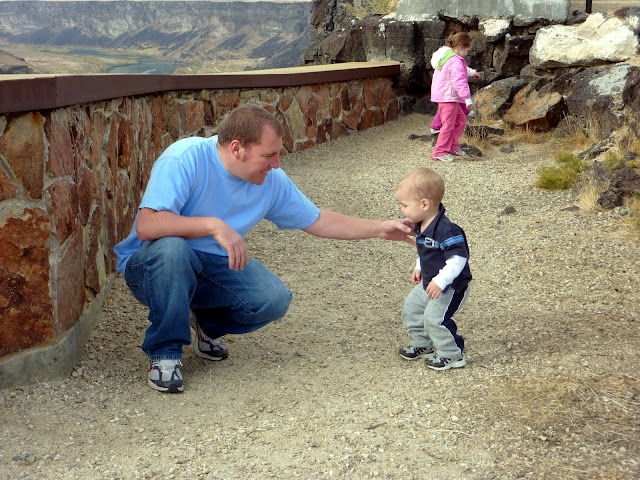 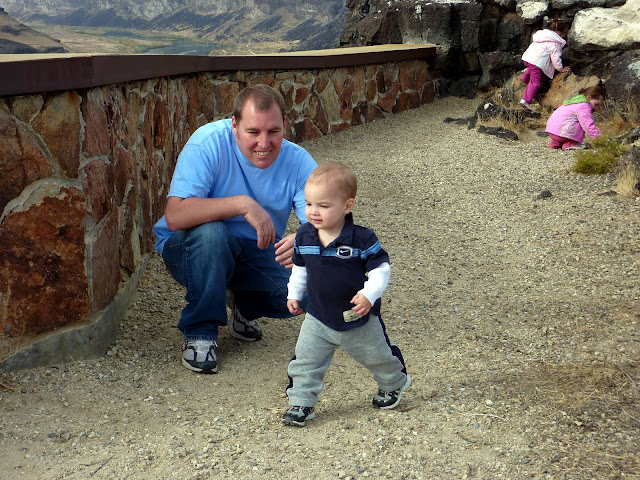 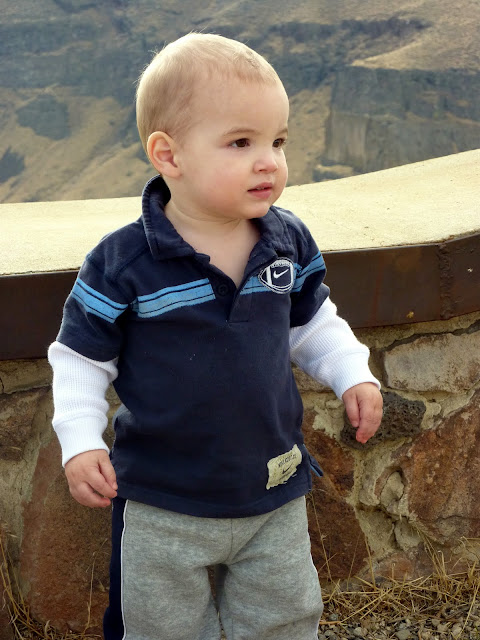 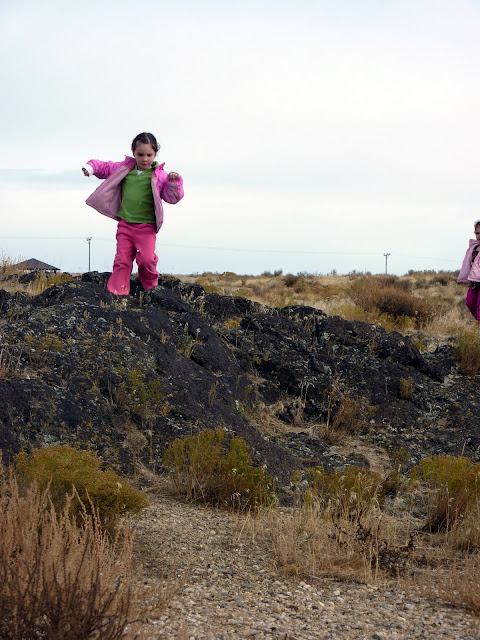 Ok, so after our little outing we picked up a Jack-o-Lantern pizza from PaPa Murphy's. We ate then got all dressed up. We headed out for some grand ol' trick-or-treating. Now, whoever decided that doing this the night before Halloween must have been doing some serious SMARTIE SNIFFIN'!!! Knock Knock, "trick-or-treat", person answers the door, gives us a weird look and says "uh, let me go get the candy", drops a few pieces in the bags and we repeat this every four or five doors. It took us about 45 minutes to hit FOUR houses!! Not so good when you have 3 young eager little kids looking for candy. We decided to bag it and make a quick visit to Alex's brothers house for some candy. Thanks Gabe and Christy! 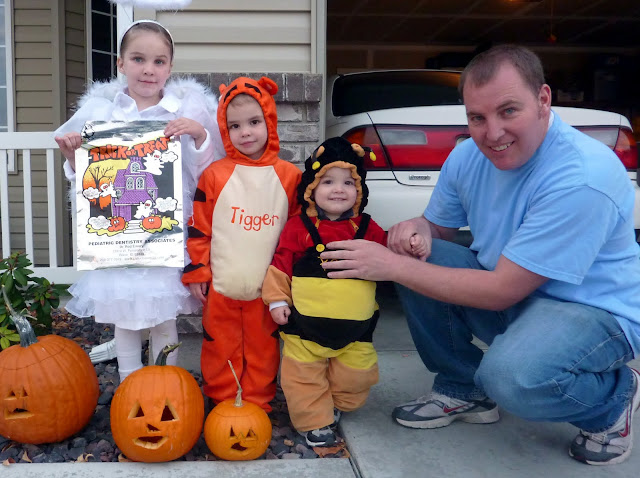 By Sunday I was pretty Halloweened out. But since our kids only had a few pieces of candy in their bags, I took my two big girls and left Alex with the babies. What a difference! Who would have thought that trick-or-treating only works on Halloween??? We filled the bags and made up for the pathetic flop the day before.

Here is a video of my kids dancing around in the fourier on Friday while we waited.
Posted by Anna Beal at 1:52 PM