Oh Logan, where to begin.  Such a huge range of emotions when I think of my little boy.  He is seriously my biggest handful.  I would have to say all my girls combined are easier than just Logan by himself.  No joke.  He demands more attention, and he is EVERYWHERE.  I finally had to put those door knob things on the doors to outside and the pantry.  I also had to put a fridge lock on the kitchen refrigerator.  This boy can punch a mean scream when he doesn't get what he wants.  He'll even do it just to tick me off.  He knows I hate the screaming.  His worst feature of all....He is a walking Latrine!  No Mom should have to change diapers like that!
Now for the things I Love!  He can be such a sweet boy who loves to cuddle.  He is the biggest sweetie to his baby sister Lexi.  He won't call her Lexi though.  He calls her "Baby".  And he is so good at playing with her.  Logan can talk, but he is picky about his words and won't EVER repeat what you tell him to.  Half the time you just have to try to understand his language.  Anyway, what do you do when your little boy grows out of his Jammies???  Just give him his sister's!  Yep!  And did I mention???.....HE LOVES THE PINK ONES WITH THE HEARTS!  Lol!!  I love it! 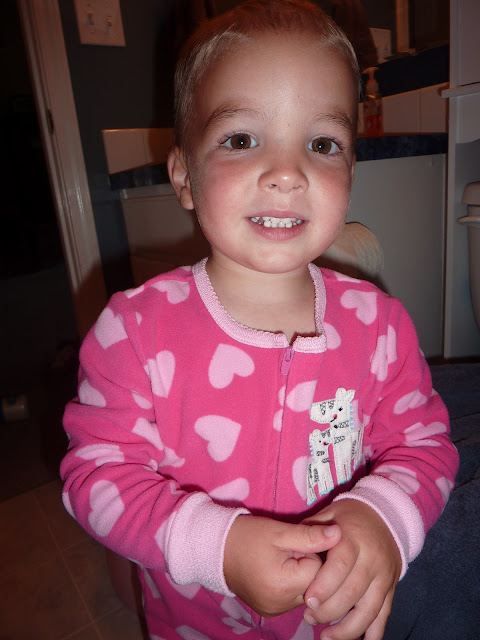